The Dark and the Wicked

The Dark and the Wicked 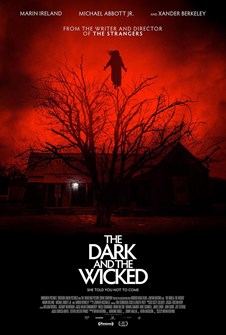 A Part of Music Box of Horrors at the Drive-In Presents: 31 Days of Terror

On a secluded farm in a nondescript rural town, a man (Michael Zagst) is slowly dying. Bedridden and fighting through his final breaths, he’s a source of deep sadness for his wife (Julie Oliver-Touchstone), who’s succumbing to overwhelming grief. To help their mother and say their goodbyes to their father, grown-up siblings Louise (Marin Ireland) and Michael (Michael Abbott Jr.) return to their family farm. It doesn’t take long for them to see that something’s wrong with mom, though—something more than her heavy sorrow. Gradually, as their own grief mounts, Louise and Michael begin suffering from a darkness similar to their mother’s, marked by waking nightmares and a growing sense that something evil is taking over their family.

In 2008, Bryan Bertino delivered a modern horror classic with The Strangers, a hit that remains creepy as hell due to its now-iconic visuals and realistic sense of domestic horror. With The Dark and the Wicked, the writer and director’s fourth feature following 2016’s critically lauded The Monster, Bertino gets nastier than ever before, ramping up the dread with a bleak supernatural chiller about how collective anguish can be a fate worse than death. But, there will also be death.