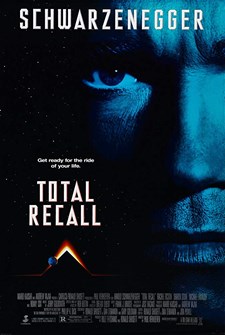 Paul Verhoeven's classic, ultra-violent adaptation of Philip K. Dick's short story “We Can Remember It For You Wholesale,” TOTAL RECALL stuns to this day. Paradoxically muscle-bound everyman Doug Quaid (Arnold Schwarzenegger) finds himself unfulfilled by his menial construction job, so he escapes every night into his dreams of a life beyond his own — planet, that is. Quaid dreams of the red skies of Mars but cannot shake the thought that something seems familiar about this imagined scenario. Unfortunately, he'll never be able to afford a trip to see the Martian landscape in person. Enter: Rekall, a corporation that promises “the memory of a lifetime” in the form of surgical implants. Rekall doesn't just offer vacations away from home, but also escapes from yourself. When the implant begins, that's where the real world begins to collide with Quaid's dreams. What is truth and what is fiction? Is Quaid really who he thinks he is, or is this all part of “vacation” from himself? The true beauty and mystery of the original TOTAL RECALL is that we, the viewers, never know. All these years later, audiences are still left guessing in the darkness as the credits begin to roll. You decide: dream or reality? — Alamo Drafthouse

Cinepocalypse will present its annual Achievement Award to the esteemed Canadian actor Michael Ironside, who has been a staple in the world of genre cinema for the past three decades. Ironside will accept his award and take part in an audience Q&A following this special 70mm screening of TOTAL RECALL.