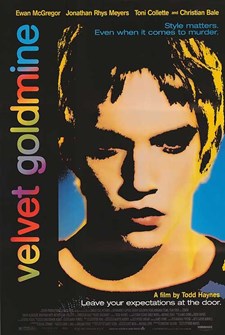 ***arrive early for THE DAVID BOWIE MIXTAPE by EXP TV***

Set in London in the early '70's during the emergence of the glam-rock scene- this film follows the rise of Brian Slade, a mythical rock icon who finds himself at the very epicenter of the pleasures and decadence of his day. At the peak of his fame, Brian and his wife Mandy cruise the nightspots of New York and mix with the likes of Ewan McGregor's Curt Wild, his spiritual twin and fellow glam rocker -- until Brian disappears after a publicity stunt gone wrong. Years later, British journalist Arthur Stuart delves into the mystery to uncover what happened.

"VELVET GOLDMINE was an orgiastic celebration of high-camp fakery and gender-fluid sexuality. Full of decadent dandies, dazzling fabrics and daring fabrications, it arrived on a wave of unsustainable hype, confounded critics and bombed at the box office. But viewed from deep into the 21st century, Velvet Goldmine looks increasingly like one of the great over-ambitious experimental cult films of indie auteur cinema. Riffing on the cultural connections between David Bowie, Iggy Pop, Oscar Wilde, CITIZENKANE and queer theory, Haynes fashioned a knowingly counterfactual chronicle of the glam rock boom in early 1970s London, with heavy emphasis on polymorphous perversity and calculated artifice." - Stephen Dalton