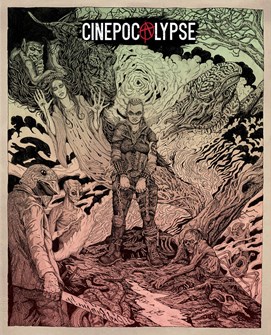 Cinepocalypse 2019 couldn’t be more excited to bring you VEROTIKA, the directorial debut from punk legend Glenn Danzig. As founder and vocalist of the iconic Misfits (recognized as the originators of the horror-punk subgenre), Glenn’s passion for film, the occult, paganism, and all things ghouls ‘n ghosts, extended into his infamous deathrock band Samhain, as well as one of the most storied heavy metal outfits of all-time, Danzig. Now, building upon his prolific career, he’s taken his love for all things horror to the big screen for the first time, with his directorial debut, VEROTIKA! Featuring a plot shrouded in secrecy and based on the output of Danzig’s long-running, mature comic book publishing company Verotik—a compound of “violence” and “erotic”—this feature film anthology is a realization of his lifelong love of comic books and the dark arts. Long story short, this is an event for the ages, and we’re beyond stoked—and more than a little terrified—to present the World Premiere of Glenn Danzig’s VEROTIKA on opening night.

***Opening Night Party at GMan Tavern featuring Metal Karaoke and Three Floyd's speciality beers on tap. 9:30pm-11:30pm. Must have ticket to Opening Night film VEROTIKA or be a pass holder of the festival for admission***