A Kiss Before Dying

A Kiss Before Dying 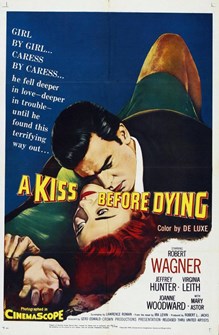 Bud Corliss is suave, charming, handsome—the ideal catch for any young woman in 1950s America. But when Bud's girlfriend unexpectedly becomes pregnant, throwing a wrench in his avaricious social-climbing, Bud becomes a literal ladykiller. This rare example of widescreen Technicolor noir is a Douglas Sirk melodrama turned homicidal. Matinee idol Robert Wagner threw a wicked curve into his career by playing one of the most amoral heels in Hollywood history; the film also garnered much controversy for its frank handling of pregnancy. Gerd Oswald's directing debut is a rarely screened look at the underbelly of American affluence in the 1950s.