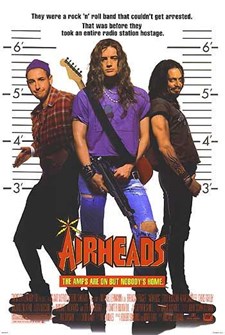 It's all been building up to this! Twenty-five years after Chazz, Rex, & Pip shred our minds and held us hostage with squirt guns, The Lone Rangers are back on the big screen in AIRHEADS—screening from a rare 35mm print, possibly for the first time since its initial 1994 release! Brendan Fraser—effortlessly sporting luscious metalhead locks to end them all—Steve Buscemi, and Adam Sandler are three lovable buffoons on a mission to get their band's demo played on the radio at any cost. Think 9 TO 5 meets DOG DAY AFTERNOON, with a shot of goofy-LA-'90s-Sunset Strip adrenaline delivered by the likes of White Zombie, Motorhead, and Primus. This spoof of heavy-metal culture that also respects the vitality and pent-up passion behind it features a powerhouse supporting cast from the likes of Chris Farley, Chicago's own Joe Mantegna, Michael McKean, Ernie Hudson, David Arquette, Judd Nelson, and so many more. From director Michael Lehmann (HEATHERS, HUDSON HAWK), we proudly present the movie that reminds us "Wrong answer, dickhead. Lemmy is God!"

- Devour the limited-time burger dedicated to The Lone Rangers! Paying homage to Airheads and the screening on 6/20. Available exclusively at the original Kuma's Corner through Cinepocalypse 6/13-6/20.

- 15% off individual bill with ticket to Cinepocalypse 6/13-6/20. Valid at any Chicagoland Kuma's Corner.