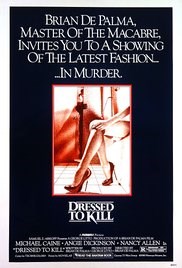 Brian De Palma ascended to the highest ranks of American suspense filmmaking with this virtuoso, explicit erotic thriller. At once tongue in cheek and scary as hell, DRESSED TO KILL revolves around the grisly murder of a woman in Manhattan and how her psychiatrist, her brainiac teenage son, and the prostitute who witnessed the crime try to piece together what happened while the killer remains at large. With its masterfully executed scenes of horror, voluptuous camera work, and passionate score, DRESSED TO KILL is a veritable symphony of terror, enhanced by vivid performances by Angie Dickinson, Michael Caine, and Nancy Allen.