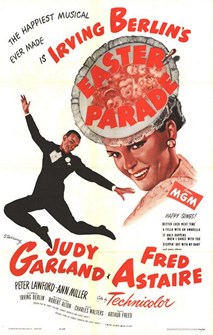 When Broadway star Fred Astaire gets dumped by his current dancing partner, he sets out to make a dancing star out of the next person he sees, which happens to be Judy Garland. Despite the relatively breezy plot, Easter Parade has a palpable intensity culminating from years of studio pressure put on Judy Garland since her days as a child performer. Easter Parade is wired, and the film features some of Garland's best work (and Astaire's too), all the more impressive because it transcends the environment that created it – ironically, M-G-M billed it as "the happiest musical ever made." The last film Garland would make for musical maverick Arthur Freed (Singin' in the Rain, The Band Wagon), Easter Parade was M-G-M's highest grossing film of 1948 and Garland's most critically successful film until A Star is Born in 1954. With seventeen songs including "Steppin' Out with My Baby," "We're a Couple of Swells," and "It Only Happens When I Dance With You," which Irving Berlin wrote specifically for Judy Garland. | 35mm from Warner Brothers