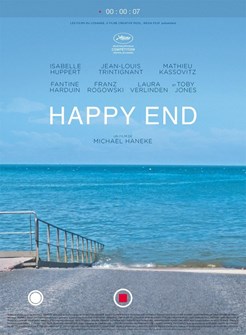 A magnificent cast — Isabelle Huppert, Jean-Louis Trintignant, Mathieu Kassovitz and Toby Jones — headlines Austrian master Michael Haneke's follow-up and partial sequel to his Palme d'Or– and Academy Award–winning AMOUR, set at a palatial estate in Calais where the high-strung Laurent clan begins to unravel after an accident on one of the family firm's construction sites brings class tensions between them and their workers to a boil.

In French and English with English subtitles

“Old Haneke is back with a vengeance” --RogerEbert.com