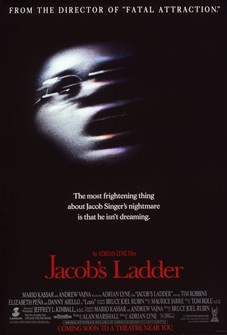 JACOB’S LADDER is the rarest of all films, one which defies both categorization and convention, not merely a by the numbers horror, nor just another drama, nor a rote thriller, it is as free of cliché as it is of constraint, cinema unwound. Terrifying to the heart, mind, and especially soul, JACOB’S LADDER posits that life and death, heaven and hell are one and the same, that reality is the most subjective experience of all, that the fleeting moments of our waking lives might never surpass the best–and worst–of our dreams. With one of the few truly great twists in film history (are you detecting a theme yet?), Adrian Lyne’s masterpiece remains one of the most influential movies of the 90s, to this day a blueprint in genre-defying filmmaking.

Presented by The Front Row