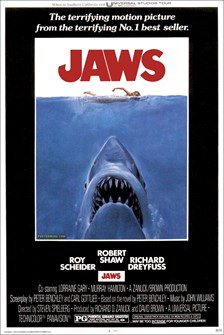 **Presented by RONAN'S REEL / CLICK HERE TO GET ADVANCE TICKETS**

When a young woman is killed by a shark while skinny-dipping near the New England tourist town of Amity Island, police chief Martin Brody (Roy Scheider) wants to close the beaches, but mayor Larry Vaughn (Murray Hamilton) overrules him, fearing that the loss of tourist revenue will cripple the town. Ichthyologist Matt Hooper (Richard Dreyfuss) and grizzled ship captain Quint (Robert Shaw) offer to help Brody capture the killer beast, and the trio engage in an epic battle of man vs. nature.

Dan Ronan was a friend to many. He had a huge passion for comedy, and was very talented when it came to making people laugh. Another great passion of his was cinema. Dan loved movies, and he loved to watch them with his friends and family. In honor of Dan, Ronan's Reel was established to raise money for help with opioid addiction and treament. Please join us for the first Ronan's Reel fundraiser on August 14th for a showing of JAWS at the Music Box Theatre. Tickets include popcorn and a beverage from the bar. We're excited to see you there!