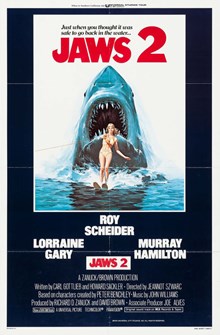 Years after the shark attacks that left Amity Island reeling, Sheriff Martin Brody (Roy Scheider) finds new trouble lurking in the waters. Mayor Vaughn (Murray Hamilton) wants to rid the beach town of the stain on its reputation. But the disappearance of a pair of divers suggests that all is not right. When Sheriff Brody voices his warnings about holding a sailing competition, everyone thinks it's post-traumatic stress. That is, until a shark fin cuts through the water.