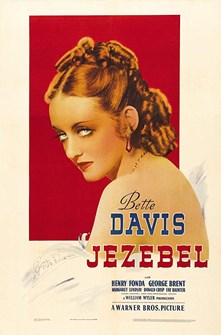 Her role in Wyler's sensitive Antebellum drama garnered Bette Davis the second—and somewhat shockingly, final—Oscar of her burgeoning career, unforgettably playing the careening New Orleans society belle Julie Marsden. Julie is engaged to Preston "Pres" Dillard (Henry Fonda in a particularly headstrong role), a banker in the midst of the biggest deal of his career, who refuses to drop his work obligations at Julie's beck and call. Julie lashes out and Pres, unwilling to capitulate, fights back—most prominently in an unforgettable, lavish Olympus Ball sequence. But in JEZEBEL, where lovers freely quarrel and North-South politics collide, a yellow fever outbreak looms and the couple's fighting soon takes a back seat to more substantial concerns—namely, life and death. In the end, Davis steals the show, for JEZEBEL is "a lurid Deep South women's picture that allows Davis first to scheme then repent: it is lit up by her little girl's conviction—a trash heap glowing at twilight...Now at last she was in her tortured element."— David Thomson