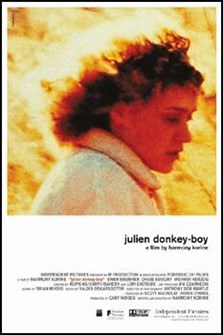 Inspired by the Danish ‘Dogma 95’ movement, though Korine breaks a handful of its rules -- JULIEN DONKEY-BOY unspools entirely from the kaleidoscopic point of view of an untreated schizophrenic navigating his family, his mind, and the outside world. Viewers willing to go on the journey are treated to a surprisingly beautiful and sympathetic portrait of the kind of family that most prefer to pretend doesn’t exist. Shot on Mini-DV then blown up to 16mm then 35mm to achieve a muddy, yet ethereal and accurate worldview straight from Julien’s head, DONKEY-BOY often feels impressionistic, which only makes the moments of heartbreaking realism that much more effective. Being based on Korine’s own experience growing up around his schizophrenic Uncle imbues the film with an overwhelming sense of love and compassion for the tragic suffering of this family, and offers a light and warmth amidst a seemingly pitch-black story. Featuring Werner Herzog’s most unhinged and inspired performance as Julien’s grief-stricken, volatile father, a beautifully tender turn from Chloë Sevigny as Julien’s sister carrying his child, & truly one of the greatest portrayals in film history from Ewen Bremner (TRAINSPOTTING) as Julien.