Meet Me In St. Louis

Meet Me In St. Louis 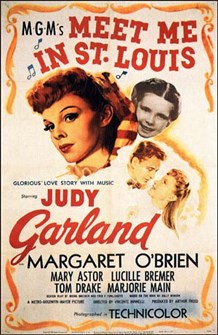 In the world of classic Hollywood, few studio runs are as legendary as the string of musicals (including On the Town, The Band Wagon, Singin’ in the Rain, and past CFS favorites Yolanda and the Thief and Easter Parade) former Tin Pan Alley songwriter Arthur Freed produced at M-G-M. It was Freed who was responsible for casting Judy Garland in The Wizard of Oz and bringing director Vincente Minnelli to Hollywood and it was Freed who paired the two future spouses in one of the Film Society’s favorite movies, an unlikely musical adaptation of Sally Benson’s naturalistic short story collection Meet Me in St. Louis. Beginning in the summer of 1903 and ending in the following spring, Meet Me in St. Louis chronicles a very busy year in the lives of the Smith family amidst the excitement leading up to the 1904 World’s Fair. Oldest daughter Rose waits in vain for a marriage proposal from her flakey beau, youngest daughter Tootie (Margaret O’Brien, delivering the best child screen performance ever) runs afoul of the whole neighborhood, their sister Esther (Garland) awkwardly woos the boy next door while working overtime as her family’s emotional rock, and Grandpa Joe does his best to be an anchor for her. A treasure trove of iconic musical numbers, unforgettable supporting performances, wistfully beautiful images, gently disquieting nostalgia, and all manner of other things sweet and bitter, we can say no less of Meet Me in St. Louis than that it’s a film very dear to our hearts, and that, at the end of a year no less difficult for cinema than 2020 was, we relish the possibility of watching it with you in a movie theater. 35mm from Chicago Film Society Collections, permission Warner Bros.