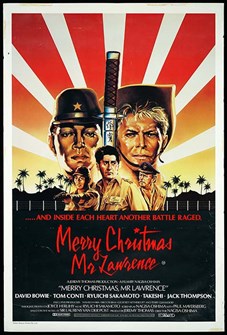 At a prisoner of war camp in the Pacific, Japanese guards and allied prisoners struggle with and against one another to maintain dignity, sanity, and physical survival under brutal conditions. The precarious balance of life in the camp is challenged by the arrival of Major Jack Celliers (David Bowie in a gloriously angelic role), a defiant British officer whose rebellious spirit threatens to ignite the tense atmosphere like a powder keg. Cultures, classes, and identities collide as a seductive battle of wills unfolds between Celliers and the camp commandant, Captain Yonoi (played by the film's composer Ryuichi Sakamoto). With simmering performances (including a young Takeshi Kitano as a mercurial Sergeant), stunning images, and a transcendent film score, director Nagisa Oshima crafts a hauntingly beautiful testament to the power of the human condition in resistance, inviting us to ponder what we might gain from crossing the boundaries that define hostility with open hearts instead of closed fists.