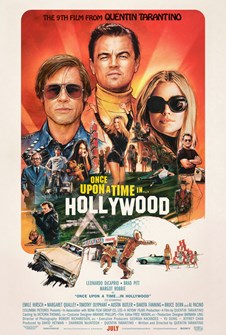 A Part of The Music Box 70mm Film Festival 2020
70mm Blowup with DTS Sound from Sony Pictures Repertory
Quentin Tarantino’s ONCE UPON A TIME... IN HOLLYWOOD visits 1969 Los Angeles, where everything is changing, as TV star Rick Dalton (Leonardo DiCaprio) and his longtime stunt double Cliff Booth (Brad Pitt) make their way around an industry they hardly recognize anymore.
The ninth film from the writer-director features a large ensemble cast and multiple storylines in a tribute to the final moments of Hollywood’s golden age.
“[A] richly evocative, conceptually jaw-dropping, excessively foot-fetishizing, inescapably terrifying and unexpectedly poignant movie.” — Los Angeles Times
“[A] disarming and characteristically subversive love letter to its inspiration.” — Hollywood Reporter
“The film is Quentin Tarantino's magnum opus—a sweeping statement on an entire generation of American popular culture and an almost expressionistic rendering of the counterculture forming at its margins, gradually growing in influence.” — Slant Magazine