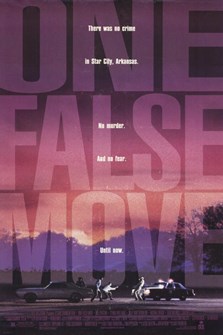 ***Opening Night | Film to be introduced by Director Carl Franklin ***

Carl Franklin's feature film debut is both a powerful crime drama and a gritty, unvanished rumination on race and class in the American South. The late Bill Paxton gives a riveting performance as Dale "Hurricane" Dixon, an Arkansas sheriff on a collision course with a rampaging trio of homicidal crooks (Billy Bob Thornton, Michael Beach and Cynda Williams) steamrolling toward his small town. Only Dixon knows the true identity of the female fugitive, with whom he shares a long-buried secret. Nasty, nuanced, and spectacularly suspenseful, One False Move is one of the greatest American neo-noir films.