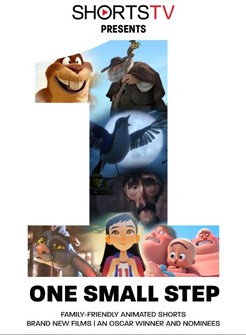 Embark on a roller coaster of imagination and possibility in this ShortsTV presented compilation of new and acclaimed, family- friendly animated short films.

Featuring the OSCAR® winning Bear Story and OSCAR® nominees One Small Step, Gopher Broke and Borrowed Time together with Maestro, After The Rain, The Green Bird, Jubilee, Achoo, Outdoors, Voyagers, O28 and more.

In collaboration with and support of local theatres around the world, ShortsTV presents ONE SMALL STEP. On this heart warming ride, audiences will befriend the kookiest animals, experience the fast paced thrills of the Wild West and a cablecar chase through the San Francisco streets before embarking on a journey to the far reaches of outer-space, all from the comfort of their living rooms.

MAESTRO (2019) - Deep into a forest, a gathering of wild animals start a nocturnal opera, conducted by a squirrel.

GOPHER BROKE (2004) - A gopher finds himself on a road where trucks are hauling produce to market. He hits on the idea of shaking some of the produce loose for himself, but other animals always beat him to the booty. That is, until a truck comes along with a cow...

AFTER THE RAIN (2018) - In a valley, a dog lives happily with his master, an uncommon shepherd.

ONE SMALL STEP (2018) - TAIKO Studios presents the story of Luna, a Chinese American girl who dreams of becoming an astronaut.

THE GREEN BIRD (2017) - This is the story of a green, noisy but lovely and caring bird who lays its first egg.

JUBILEE (2016) - After a sudden burst of wind in Buckingham Palace, the Queen’s hat gets carried away around London. Fortunately, a trustworthy guard and a playful corgi run after it!

ACHOO (2018) - In ancient China, a little dragon who can’t breathe fire will fight to overcome his weakness.

OUTDOORS (2017) - A very old apartment dweller steps out of her cage and into the big city after her pet bird is accidentally set free by the little girl next door. As she searches for her lost bird, she discovers something bigger than the city itself.

VOYAGERS (2017) - A tiger escaping his hunter ends up in a space station occupied by an astronaut and his goldfish.

BORROWED TIME (2015) -  A weathered Sheriff returns to the remains of an accident he has spent a lifetime trying to forget. With each step forward, the memories come flooding back. Faced with his mistake once again, he must find the strength to carry on.

BEAR STORY (2014) - An old, lonesome bear tells the story of his life through a mechanical diorama.

O28 (2019) - In Lisbon, a German married couple is about to get aboard the legendary n°28 tramway, but how should you react when the brakes let go and embark you on a vertiginous race with a baby on board?