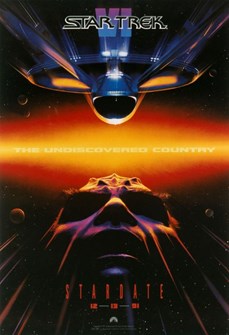 The final entry in the Star Trek franchise starring the cast of The Original Series (and the last Star Trek film to receive a 70mm release), THE UNDISCOVERED COUNTRY is a still timely Russian/American allegory that borrows heavily from Shakespeare and finds the crew of the Enterprise gracefully confronting old age. Hesitant to admit he was really a fan, Gene Siskel revealed on "At The Movies" that after 6 movies, he'd "really grown to like these people." Featuring an earth shattering Dolby SR soundtrack and Christopher Plummer.