The Adventures of Prince Achmed

The Adventures of Prince Achmed

A FILM BY: Lotte Reiniger 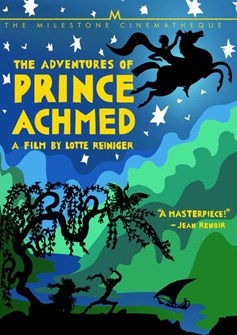 Teenage scissor prodigy and self-described “primitive caveman artist” Lotte Reiniger began working in the film industry as a designer of animated title cards in 1916 and soon found herself mixing with a coterie of bohemian cartoonists. Reiniger’s big break came in 1923, as hyperinflation sent the value of the Deutschmark plummeting; one of her patrons, Berlin banker Louis Hagen, converted his liquid assets to the relatively “safe” currency of raw motion picture stock and built a small studio for Reiniger over the garage of his Potsdam vegetable garden. After three years, Reiniger emerged with THE ADVENTURES OF PRINCE ACHMED, a literally hand-made tapestry of silhouette animation that may as well have sprung from a magic lamp.

A free adaptation of several stories from the ARABIAN NIGHTS, this mythical journey from Bagdad to Wak-Wak, with plenty of witches, sorcerers, and flying horses along the way, conjures more wonderful sights from card stock and tissue paper than most modern blockbusters can scare up with the budget and computing power of a small nation-state.

PRINCE ACHMED is now recognized as the earliest surviving animated feature film, but that’s perhaps the least astounding thing about it. The craftsmanship of PRINCE ACHMED remains singular and undiminished, with its intricately designed puppets, its freely undulating backdrops, its otherworldly special effects, and its unstoppable narrative ascent to the clouds.

The original negative of PRINCE ACHMED was destroyed in World War II, but luckily a tinted nitrate print was safely ensconced at the British Film Institute; this copy served as the basis for the film’s 1999 restoration, which yielded an irreplaceable print produced with historically authentic tinting methods.