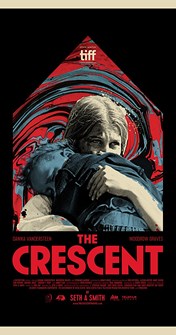 A young widow and her two-year-old son take shelter in a massive, creepy seaside house after the sudden death of her husband. But rather than follow the tropes of standard jump-scare storytelling, The Crescent places a unique focus its child star, some truly impressive visual touches, and a consistently ominous sound design. This creepy Canadian import, which premiered in TIFF’s Midnight Madness program and was called a ghost story about loss, is guaranteed to get under your skin.