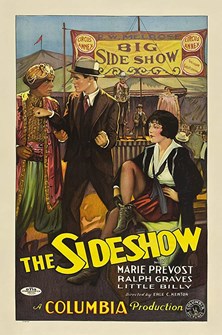 One of a handful of surviving silent features from Columbia Pictures, THE SIDESHOW is the kind of unpretentious, bread-and-butter entertainment that regularly tumbled out of the Gower Gulch assembly line to meet the demands of small-town exhibitors. After the dissolution of her family’s trapeze act, Queenie (Marie Prevost) takes up with the traveling sideshow troupe of P. W. Melrose (“Little Billy” Rhodes), a circle of social outcasts harboring a saboteur. Melrose suspects carnival barker Ted Rogers (Ralph Graves) to be the culprit, an accusation that could also serve as a swift resolution to their mutual pursuit of Queenie. The rare dramatic showcase for Rhodes (a little person who later acted in THE WIZARD OF OZ) was scarcely noticed, itself treated like a sideshow on the fringe of a changing industry.