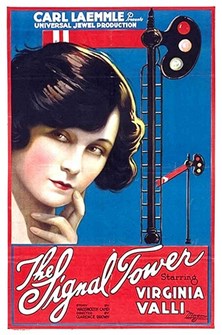 Clarence Brown turned a working rail line into his studio for THE SIGNAL TOWER, a mountain melodrama shot entirely on location in California’s redwood country, hundreds of miles from Hollywood. Switch operator Dave (Rockcliffe Fellowes) works a 12-hour shift at the signal tower, then goes home to his wife Sally (Virginia Valli) and Sonny (Frankie Darro) in their made-to-order cabin. The family takes on a new boarder, Joe (Wallace Beery), the dandified city boy who alternates shifts with Dave at the signal tower and aspires to do so in the homestead too. A stunningly photographed and emotionally direct saga of man and machine, THE SIGNAL TOWER has been restored by the San Francisco Silent Film Festival in conjunction with Photoplay Productions.