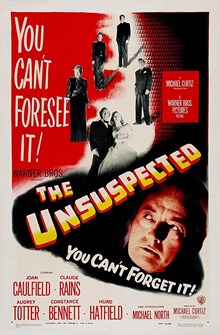 When the secretary of a popular radio personality (Claude Rains) commits suicide, the commentator uses his considerable storytelling gifts to suggest Murder! and flush the culprit from a rat's nest of suspects. This clever and complex murder mystery—chock full of terrific character actors (including a sexy and savage Audrey Totter)—gets the deluxe noir treatment from director Curtiz and ace cameraman Woody (The Killers) Bredell.

Restored 35mm print courtesy of the Library of Congress.