To Have and Have Not

To Have and Have Not 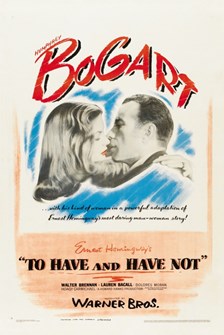 Humphrey Bogart (having just come off the success of CASABLANCA and THE MALTESE FALCON) couldn't have been a bigger star at the time, and finding a co-star for him seemed an impossible task--that is, until 19 year-old Lauren Bacall arrived on the scene. Howard Hawks was no stranger to sensual, tension-fueled on-screen relationships (HIS GIRL FRIDAY, BRINGING UP BABY), but even he wasn't prepared for the smoldering, tangible, visceral sexuality between the wildly seductive gaze of Bacall and the cool, calm confidence of Bogart.

Bogart plays the captain of a fishing boat during WWII. Taking a break after a day of disappointments, he sees Bacall (who, is referred to as Slim throughout the film, as she was by Bogie in real life) crooning in a local lounge. After their eyes lock, what follows is one of the steamiest films ever committed to celluloid. Although it snowballs into a geo-political romance of a decidedly Casablancian sort, Hawks is only truly interested in the cat and mouse flirtation of Bogie & Bacall, building tension via blocking, perfectly placed close-ups, music, and heaps of loaded dialogue from none other than William Faulkner.