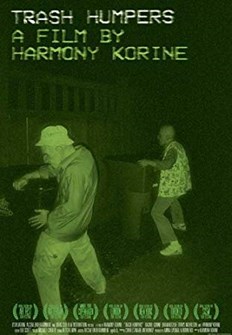 Even by Korine's standards, TRASH HUMPERS is an intensely strange film to say the least. Though an attempt at plot description is a rather silly exercise, the film concerns itself with a group of outsiders in Nashville who record their day to day existences -- mischief, dancing, singing, and yes, humping inanimate objects -- on cheap video cameras. For those willing to experience it, the film quickly begins to reveal its true self through repetitions, anarchy, & chaos as it develops into a surprisingly honest experience in humans existing purely as id, with nothing in sight coming near to social graces or any such restrictions. As is often the case with his films, Korine places the viewer squarely in a world that most would rather ignore. But if you don't look away, and listen closely, you may just begin to see the beauty in the unhinged, fringe-existing wildlings and their beautifully perverse, arguably pure existences of destruction, lawlessness, & childlike glee as they hump their way through the shadowlands of Nashville & reveal many an uncomfortable truth about the supposed normal members of society.

"We were trying find the glory in the shadows. We were just trying to let the shapeshifters – those people that live under bridges – get out and dance, you know? We were just trying to give that beautiful energy some life; trying to let the arsonists be arsonists and let them vandalise in all their pageantry – give it some light, give it some universe... let it transcend." - Harmony Korine